Navigating Guardianship of a Minor 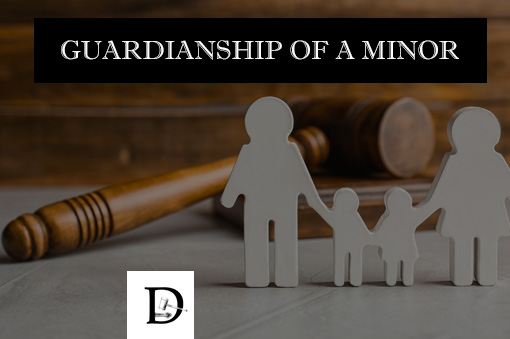 Not all children are raised by their mom and dad. According to the US Census Bureau, in 2019, nearly 19 million children in the United States lived with only one parent, and nearly 3 million children were being raised by people other than their moms and dads.

If you are a parent, extended family member, or a person close to a family who wants to take on the full-time responsibility of caring for a child, in the State of Florida, and the parents do not sign a power of attorney over the child, there are three ways that you can legally get custody without the Department of Children and Families. This includes guardianship, adoption, and temporary relative custody.

The following article provides more explanation about how to navigate the options and why our law firm recommends guardianship of a minor when appropriate.

Guardianship of a Minor

While parents are the natural and legal guardians, guardianship is a legal process for when a minor child needs someone other than a parent to make his or her legal decisions. A guardianship co-exists with the legal relationship between the child and the biological parents.

To become the guardian of a minor, without the parents’ consent, deference is given to the natural parent pursuant to the common law parental preference rule, unless and until there is sufficient proof to establish abandonment, parental unfitness or it would be detrimental to the child to remain with his or her biological parents. The rights of the parents will always be paramount. There must be clear and convincing evidence it would cause lasting emotional, mental, or physical harm for the child to remain with her or his biological parents.

Adoption of a Minor

When a minor child is adopted, it is a permanent relationship and the biological parental rights are severed from the child. The adoptive parents will have exclusive custody of the child. This also means that child would not automatically receive an inheritance from his or her biological parents, and the biological parents would no longer owe child support. Adoption requires the consent of the parents or sufficient proof that, in some fashion, the parents have abandoned the child or otherwise demonstrated that they are not a fit subject to continue to enjoy the privilege. Each case is very different, and you should fully discuss the circumstances with an attorney.

Temporary Relative Custody of a Minor

In the State of Florida, temporary relative custody allows for an extended family member or stepparent of a minor child to do everything necessary to care for the child, including making decisions at schools, with counselors, and all healthcare providers. The order is “temporary” and similar to adoption, requires the consent of the parents, or show that the parents have abused, abandoned, or neglected the child. When concurrent custody is awarded, this allows for the extended family member to have custodial rights to care for the child concurrently, or alongside, the rights of the parents. There is also a requirement that the petitioner has physical custody and has had physical custody of the child for at least 10 days in any 30-day period within the last 12 months.

Guardianship Cases in the Florida Courts

#1 – Florida Supreme Court Case
In the case of In re Guardianship of D.A.McW., 460 So. 2d 368, 369 (Fla. 1984), the parents did not marry and when the child’s mother passed away, both the maternal grandmother with whom the child lived and the biological father petitioned the court for custody. The Courts ruled that the natural-born relationship between the child and biological father superseded the rights of the child’s grandmother unless it could be shown that custody with the parent would be detrimental to the child’s welfare. Initially, the trial Court awarded custody and guardianship to the grandmother. Upon appeal, the Florida Supreme Court upheld the appellate Court’s reversal of the trial court’s award for custody to the grandmother, stating that the natural parent’s custody rights prevailed over rights of a third party such as grandmother unless it was shown that custody with the natural parent would be detrimental to the child’s welfare.

#2 – First District Court of Appeals Case
In the case of Morris v. Morris, 255 So. 3d 908, 909 (Fla. 1st DCA 2018), the stepfather was awarded custody of a child. The biological father lived in another country and was fit for custody, however, when he appealed the decision, the Courts upheld that it would be detrimental for the child to relocate outside the US to where the biological father lived. The common law rule of parental preference provides that where the custody dispute is between the parents and a third person, the rights of the parents are paramount unless there is a showing that, for some substantial reason, custody in either or both of the parents would be detrimental to the child’s welfare. Detriment refers to circumstances that produce or are likely to produce lasting mental, physical, or emotional harm. In this case, there was an in-depth hearing and the child testified. Even though the court included a “best interests” test the court held that it would be detrimental, cause mental, physical or emotional harm to uproot the child from her home and send her to the other side of the world when her schooling and friends were what the child relied upon for stability after her mother’s death.

Talk to DiFranza Law About Guardianship of a Minor

Regardless of the route you take, guardianship, adoption, and temporary relative custody orders require awareness of Florida Laws and lots of research. That is what we do. We help families take care of families. If you have questions about how the process works or if you have an immediate need to seek a petition for guardianship of a minor, click here to request a consultation.